The last two entries were a little dark and heavy, so I decided to lighten things up a bit with everybody's favorite summertime dessert, Gelatine. I'd use that other name but they're probably sue. Besides, I'm not really talking about THEM. 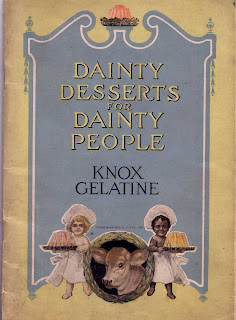 A long time ago, I bought a movie magazine from 1917. It had a cover story about Wallace Reid, a snippet of an O. Henry story enticing you to buy the rest of the collection, ("...Tansey heard a musical, soft giggle, and breathed an entrancing odour of heliotrope. A groping, light hand touched his arm, and then...") and a marvelous recipe for Ivory jelly held within the confines of an advertisement for Knox Gelatine. Better still, if you sent away for it, you could receive this marvelous little cookbook called Dainty Desserts for Dainty people.

Now I'm trained. Wallace Reid, Ivory Jelly and Heliotrope are forever fixed together in my mind, and whenever one comes along it unearths a terrible craving for the other two. The first appearance of heliotrope flowers in the spring makes me want to dig out The Birth of a Nation and watch only the part where Reid gets into a fistfight with two other men who rip his shirt off in the scuffle. Oh, my, yes it does. And if I make a batch of ivory jelly and eat it while I watch the film, I'm in heaven.

Today, however, I am trying something a little different. The color pictures in the Knox booklet always make me want to try the recipes. Nowadays, if you go ver to the Knox recipe site and look things up, you'll find fifty pages comprised of two things: Jelly and cheesecake. It seems that all the fancy - ahem, I mean dainty - desserts have been forgotten. I guess it's up to me to rescue them!

Pardon me while I tie this red sheet around my neck and climb to the top of the bookcase. 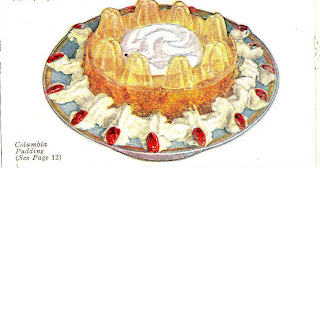 Today's experiment will be Columbia Pudding! Now before you get all crazy and drooly on me, I don't have one of these highfallutin' pans. They just don't make them anymore, and the ones on ebay are just stupid expensive, there's no way I'm ever going to buy one. So I just have a little copper jelly mold pan from the sixties. That's what we have to work with today. 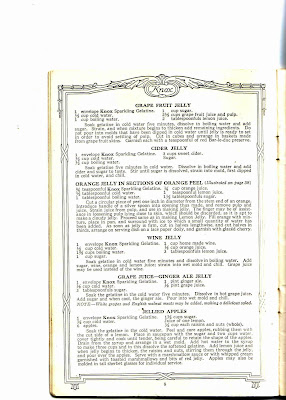 DARN THIS BLOG. I keep making big pictures so you can see the details and they still upload as teensy weensy pictures. Oh well, just click on them to make them bigger. I deliberately kept this

whole page together so you could see some of the recipes and maybe try them out later. Anyway, the first part of the Columbia Pudding recipe involves the wine jelly that is described on this page.

At first glance, it looks equal parts interesting and nauseating, but as I cooked up it and tasted it, I was amazed. It was sangria! And not only sangria but GOOD Sangria! For some reason I expected it to taste like mulled wine, which is very much a love it or hate it thing, but I was very pleasantly surprised. After filling the bottom of my mold with the wine jelly mixture, I soaked the cut figs in the stuff for about five minutes and then stuck them to the sides of the pan as directed. It took a few tries but I found that if you hold an ice cube against the outside of the mold, just opposite where you're pressing the fig half, it's sets quickly and stays in place.

Yeah yeah, I know, they look like little leeches. Never fear! After slurping up the remaining sangria the figs left behind, you won't care a bit. 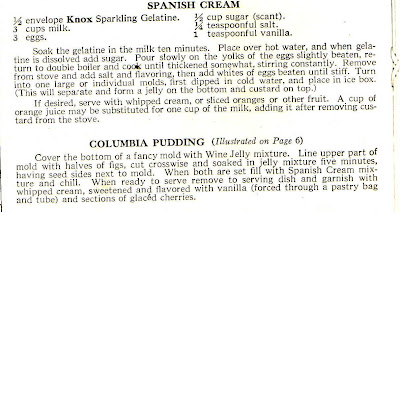 The Spanish Cream part of the recipe took a bit of doing because I don't have a double boiler. I did the ol' Alton Bron trick of floating your bowl of goodies in a pan of hot water and it did the trick quite nicely. The Spanish Cream was really very tasty, but the whipped egg whites...I don't know, that was a mysterious addition to the recipe. It doesn't mention if you're supposed to add them while the stuff was hot or wait for it to cool down. I had to guess. I've heard of a dessert called Floating Island where merengues are added to hot milk pudding so they'll solidify into tiny islands. So I folded in the egg whites while the milk was still hot, but not boiling. The broke up into bazillions of tiny white balls of foam and floated on the mix. Hmmm. Okay, time to pour.


Okay, so it's been sitting in the fridge overnight, and today is the unveiling of a treat probably not seen since The Great War! Drumroll please... 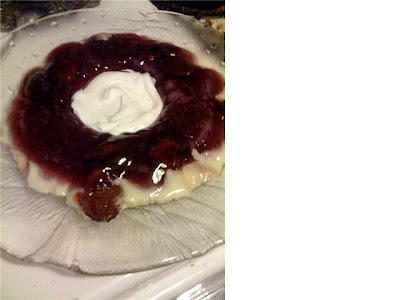 You will, of course, notice a few things...

Number one, it looks nothing like the original illustration. Being the great genius that I am, I didn't have any white wine around the house, so I used what I had on hand, which was a lovely Cabernet. What was the point in going to the store and sacrificing $20 on an experiment, sez I to myself. In retrospect, perhaps a nice, sweet Gewirtztraminer would have been the best choice from a photographic standpoint, but it will have to wait until next time. That odd little purple teardrop shaped thing in the front of the pudding is a fig. I only popped in a few. If I'd ringed the mold I'm sure it wouldn't look quite so out of place.

Number two, it doesn't have a border of cherries and whipped cream around the perimeter. This is because I thought the original illustration was a tad bit CREEPY, looking as though it had been carefully garnished with severed, manicured fingers.

Now for the real question. How does it taste?

I'd have to say the the individual flavored jellies were quite good, but put together they lost something. I think it would have been tastier if I had used grape juice instead of wine. That being said, I'm absolutely going to make the wine jelly again on it's own, pour it into individual cups and call it Sangria Gelatine. I thought that was the BEST stuff! My husband preferred the vanilla milk custard, and asked if I could just make that part later.

A word if you're going to try this at home: Double the gelatine in the recipe. I don't know if packages were larger in 1917, or stronger, or whatever, but in all the recipes I've tried from this booklet, the gelatine was a little weak and the jelly just went blaaaahhhh all over the plate when it was unmolded. Doubling the gelatine will produce a sparkling tower of dessert. I forgot to double the gelatine in this recipe, so it flattened out considerably. I also only had a shallow jello mold, so if you have a cathedral mold or something lying around the house, go ahead and use that. I used to have a nice deep bundt pad but when I started looking for it, I realized I hadn't seen it in two or three moves, which goes to show you how often I make a bundt cake.

And thus ends today's lesson on how to recreate a a tiny piece of time from scratch. I will now retire to the comfort of my squishy sofa, feed my Wallace Reid addiction (oh dear...sorry Wally) and breathe the entrancing odor of the heliotrope in bloom outside my door. 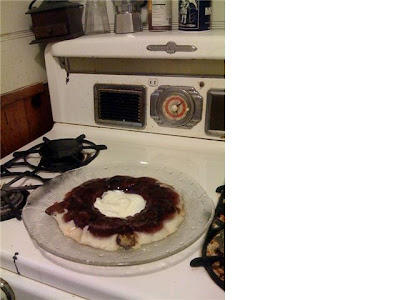 
A much clearer scan of Dainty Desserts for Dainty People may be found here.

My scan comes from my own copy, but if you want to flip through this book and find recipes of your own, this site not only shows it off but magnifies it beautifully.


I thought I was so original until I found this tremendous british site showing off historic recipes and their perfect recreations. But they totally cheat because they own the original antique molds, the blighters! If you have a week to spend in England and several hundred dollars, they can teach you how to do it, too. But of course you don't get to bring the molds back with you. *grumble grumble*
Posted by Timecat at 9:51 PM No comments: 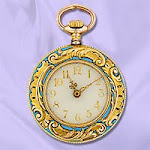